Of Religion and lack of it


[This was an age-old email in a mail conversation written by me. I think it dates back to 2001-2003 considering the participants. It was a part of my thoughts when I was leaving religion gradually those days, and here I was trying to explain it to others. My English may not be refined enough but that was all I could]


I find following facts important if you're considering the possibility of any religion being universal truth. Warn, in this context I do not explicitly respect any religion for the sake of my argument. So pls do not get hurt. W/o debate you can never understand.


Why do religions always owe their roots to the other preceding religions? If it is bloody truth, why needing an alibi? Why can't it stand totally on their own, leaving behind the childhood preachings of the founder completely?


Christ invented the redemption for the curse mentioned in Judaism. Buddha found the end to the sansara cycle which was taught in pre-buddha vedic teaching. Big problem is, if we think that one religion is the universal truth, then its preceding religions also have to be a part of that truth. Then you feel very unfair to think that only a particular set of people knew all the truth and rest of the world never did.


Buddha alone can be super-genius, but how can many preceding Indians also be super-genius [for their share in Dhamma] but Hebrews, Egyptians or Chinese weren't? I'd expect wisdom to happen all over, not at only one place.


2. Failure to see life as Evolution:


Life was a key topic of every religion. But so far I have never seen a precise explanation of life being derived from tiny molecular beings many billions of years ago, found in any of the religions. I know some ppl have found one or two similar lines. But the ones I saw are in the type of "nostre-damus knew 9/11", i.e. very distant word riddles that can be interpreted as you wish.


I am with strong understanding that life got derived from small molecular beings. There is so much evidence for it. But why did all religion founders fail to explain it? They have taken up similar topics, so you can't say that they knew it but found it irrelevant. I think they DID NOT know it. And it is a very important fact they have missed.


3. Need for intangibility to explain life:


What would a vedda/tribesman think if he sees a robot or a car? He would beyond doubt think that there lives some soul in it. It is natural to associate some intangible force to any activity that you fail to understand. I think that soul/athman/gandabba+prathisandhi et al are similar attempts. Truth remains that simple biology and chemistry can explain all what human/life does, if that extremely complex process can be deduced within a human brain. In another words, life's material explanation still lacks enough neuron CPU power to be deduced, but it is deterministic.


It makes intangibility optional. No longer an essence. Whereas all religions have noticed the macro scale complexity of life as a result of an intangible force.


4. Why do we not find people "realize" other religions w/o influence:


5. Causality [I did not mean Hethu Pala Vaadaya here] and Randomness:


Every religion depends on the framework of cause-result. At macro scale we think that this is so. We have evidence. Pull the trigger bullet goes. Fails to go, some reason can be found. Pure causality.


At micro/nano/pico scale, what we find is a set of random events. They have a probability space of anything. Pull the trigger, the house is built !!! But the likelihood is very low. However these minute scale randomness, which exhibit the nature of converging at macro scale, can be taken as one way to explain the whole universe. Infinite number of minute random events. The collaboration of them leaves us with only distinct macro scale possibilities [infinite number of], which is in fact our imagination.


See the number of possibilities are infinite here. But they are not all equally probable.
Posted by Sujeewa Kokawala at 10:21 AM 1 comment: 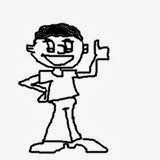